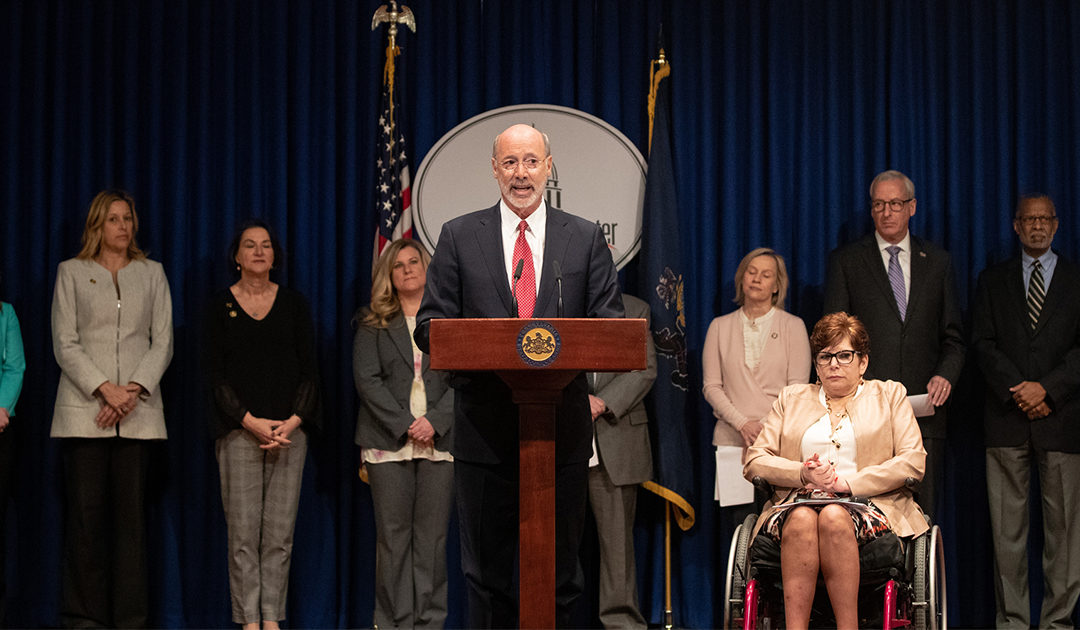 HARRISBURG, PA, March 26, 2019 – Democrats from the Pennsylvania House and Senate today introduced a package of legislation aimed to curb harassment in the workplace, along with support from Governor Tom Wolf and Victim’s Advocate Jennifer Storm.

“As a caucus, we’ve worked with stakeholders and advocates and our own employees to craft a package of legislation that we believe can curb sexual harassment and do more to protect its victims,” said Senate Democratic Leader Jay Costa, Jr. “Each of our bills in this package is aimed at expanding protections to individuals regardless of the size or type of their employment, because time is up on workplace harassment.”

“Workplace sexual harassment and discrimination didn’t begin overnight, and so it will take some time to properly correct,” Gov. Wolf said. “It’s not as easy as putting a few big-name figures in jail. We need to identify the everyday behaviors and correct them if we want Pennsylvania to be a great place to live and work. People can’t do their best work when they feel uncomfortable. You deserve to be treated in a way that meets basic standards that represent how we want all workers in Pennsylvania to act, and you should be treated with the respect and dignity that all workers in Pennsylvania deserve. That’s why I’m advocating for legislation to prevent workplace sexual harassment and discrimination in both the public and private sectors.”

The bills will be introduced in identical form in each chamber. They do the following:

“For years, workplace harassment has been a pervasive issue in career fields across Pennsylvania and this nation. We need to harness the momentum and strength of the #MeToo movement and reverse years of discrimination in the workplace,” said Senator Larry Farnese. “No one, regardless of gender, race, or sexual orientation, should be pressured by, or suffer from, the weight of workplace harassment.”

“We need to make it clear that there is no place for any form of harassment and there will be no tolerance for it either,” said Senator Wayne D. Fontana. “With this legislative package, we are taking definitive steps that both send a strong message and back it up with substantive changes to how harassment can be prevented, how it should be handled and how victims should be treated.”

“Protecting whistleblowers on workplace harassment and discrimination is a small part of the solution to change our culture.” said Senator Haywood. “I am introducing this legislation again knowing that we have a long way to go.”

“In today’s business climate, when employers often turn to independent contractors and unpaid interns to fulfill their staffing needs, Pennsylvania law must account for and protect all worker classifications. Everyone is entitled to a workplace that is free of harassment and discrimination,” Senator Tartaglione said.